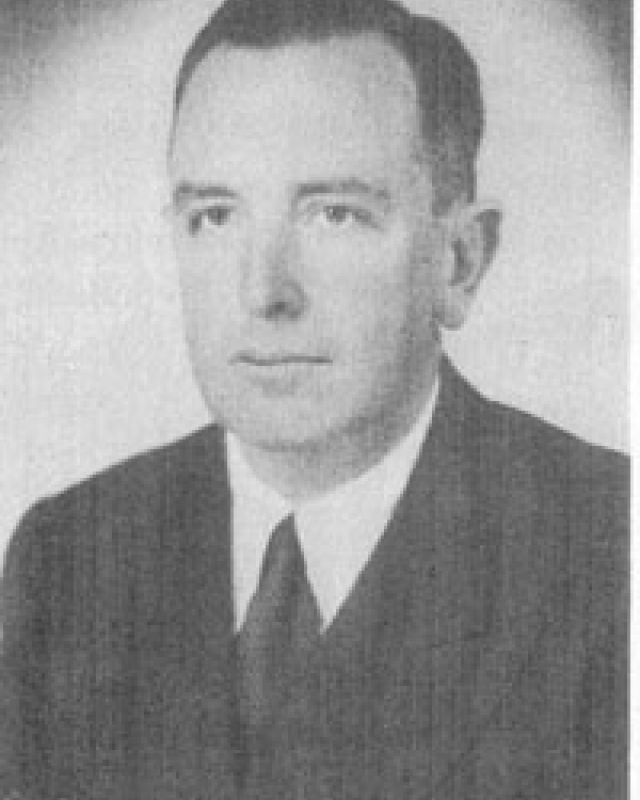 Dr. Mackinnon was an internationally well known medical mycologist whose whole life was dedicated to research. He was the founder of the Uruguay school of Medical Mycology and was noted for his keen observations, critical thinking and scientific spirit.

His mycological studies began in the School of Medicine, Montevideo, together with Rodolfo V. Talice, who became Professor and Chairman of Parasitology and a very well known specialist in Chagas’ disease. Talice invited Mackinnon to his laboratory to examine dermatophyte cultures. Between 1928 and 1934 they published 21 papers on yeasts and dermatophytes.

Mackinnon occupied several successive teaching and research positions at the Institute of Hygiene, School of Medicine of Montevideo: Assistant (1927-1935), Assistant Professor (1935-1949), Chief of Parasitology Section (1949- 1964), Associate Professor (1945-1964) and finally Professor and Chairman of the Department of Parasitology (1964-1969).

Beginning in 1948 Mackinnon dedicated all his efforts to research in the field of Mycology. Professor Mackinnon received several recognitions during his career including the Rhoda Benham Award from the Medical Mycological Society of the Americas in 1970. In 1974, he was named Emeritus Professor of School of Medicine and in 1976 he was made a member of the Uruguay National Academy of Medicine.

He was one of the founders of the International Society for Human and Animal Mycology and served as its second President (1958-1962). Dr. Mackinnon’s history of medical mycology in the inaugural issue of Sabouraudia (the ISHAM journal) should be required reading for medical mycologists (Sab.1:3-7, 1961).

In 1939 Mackinnon came to the United States to visit and study with the foremost researchers in medical mycology such as J. G. Hopkins, Rhoda Benham, C.W. Dodge, W.J. Robbins, Chester Emmons and others. In 1955 he made a trip to Europe visiting with well known mycologists such as J.T. Duncan, G.C. Ainsworth, G.A. De Vries, R. Vanbreuseghem, G. Segretain, F. Mariat, E. Drouhet, etc. During this trip Mackinnon created a permanent visual section for the Wellcome Museum of London which was commented on in some details by Ainsworth in his “Introduction to history of medical and veterinary mycology”.

In his third international trip in 1962 Dr. Mackinnon visited prominent research centers in the United States of America, Canada and England. His objective was to obtain information with respect to ambient temperature and mycoses which was his principal theme of interest at that time.

Dr. Mackinnon’s contributions to mycology ranged across the field. Lodder and Kreger van Rij in ¨The Yeasts¨ (1952) give details on the papers of Talice & Mackinnon of 1933 related to Candida albicans.

Following his initial observations, Mackinnon developed studies on cultural variations in Candida albicans (¨S¨ smooth, ¨R¨ rough and ¨L¨ lethal), which gave origin to the important monograph ¨Zimología médica¨. Lodder and van Rij made favorable comments on that publication and considered strain 572 of C. albicans from MacKinnon's collection as a type species.

They also accepted C. stellatoidea as a separate species from C. albicans. Later on, Alvarez and Mackinnon demonstrated that the ¨L¨ variant of C. albicans had a genetic loss in its respiratory function. It should be stated that Ricardo Artagaveytia – Allende played an important role in all Mackinnon’s work on the genus Candida and a paper published in J. Bacteriology (1945), summarizes their primary experiences and results.

Mackinnon published his doctoral thesis on various animal models and fungal Pathogenicity in 1936. Thom & Raper later included a new species of Aspergillus, A. montevidensis, described by Talice and Mackinnon in 1931 in their book of 1945. Together with Angel Gaminara, Mackinnon published the first observations on black piedra and its agent Piedraia hortae in Uruguay in 1930. In 1933 he described the first Uruguayan case of chromoblastomycosis produced by Phialophora verrucosa.

His interest in sporotrichosis began in 1930 with the description of 3 national cases and some years later he published the characteristics of the parasitic asteroid form of Sporothrix schenckii. Today, we attribute great importance to the observation of these parasitic forms for the diagnosis of the disease.

Mackinnon and Artagaveytia- Allende demonstrated physiological differences in vitamin requirements among strains of the species Trichophyton discoides, T. ochraceum and T. album, claiming they were synonymous. Today, they correspond to T. verrucosum, the common cause of cattle ringworm.

In papers published in 1940 and 1950, Mackinnon demonstrated that the cellular wall of P. brasiliensis was much thinner than that of Blastomyces dermatitidis using Best carmine and silver carbonate stains. This finding permitted the identification of South American patients previously published as cases of North American Blastomycosis as true cases of Paracoccidioidomycosis.

Probably influenced by the pioneer studies of Dickson, Gifford and Charles Smith in the United States on subclinical forms in Coccidioidomycosis, Mackinnon thought that similar forms should exist in Paracoccidioidomycosis with a higher frequency than the well known disseminated cases with mucosal lesions. A first step to substantiate the hypothesis was to prepare a specific paracoccidioidin. This objective was achieved in 1953 and in 1957 Hounie and Artagaveytia confirmed Mackinnon’s hypothesis with a skin test survey.

Until that time most medical mycologists believed that P. brasiliensis entered the human body through the oralpharyngeal mucosa, producing the well known granulomatous-ulcerated lesions responsible for seeking medical care. They also believed that the fungus usually reached the body by means of small pieces of natural wood used as toothpicks by rural individuals.

Mackinnon thought the skin test reactive asymptomatic people might have become infected with the parasite through the pulmonary route. In 1959 this hypothesis was demonstrated in mice infected by inhalation of P. brasiliensis suspensions using the same experimental methodology previously employed by Conti Díaz in Cryptococcosis. In such studies both pulmonary and visceral hematogenous lesions were observed.

Mackinnon concluded that the organism entered the host by the pulmonary route resulting in lung lesions with eventual blood dissemination. Then the typical mucosal lesions would evolve as a final stage of the disease. This is the accepted course of events in Paracoccidioidomycosis today.

Mackinnon and his colleagues made significant contributions to the ecology and clinical manifestations of Paracoccidioidomycosis and Sporotrichosis with respect to their growth temperatures. Using animal models they demonstrated the various responses at various temperatures. These studies are recognized toady as basic tenets of these diseases.

In 1950 Mackinnon and Gurri demonstrated through the use of the Best Carmine stain that the cellular wall of Histoplasma capsulatum was really thin thus negating the common belief of the existence of a capsule around the fungus.

In 1959, Mackinnon and Conti Díaz pursued the various responses to temperature variations with this mycosis. They correlated growth characteristics of the fungus with the clinical manifestations in various climates.

In 1949 Mackinnon, Ferrada Urzúa and Montemayor described, a new fungal species agent of maduromycosis named Madurella grisea which became recognized as the most frequent agent of the disease in Latin America. Mackinnon published several papers on this pathogen. In 1954 he described the different characteristics of the granules of the species and those of

Mackinnon was soon recognized as a worldwide specialist in mycetomas and was frequently consulted by other researchers. Borelli, in 1976, described a new agent of mycetoma and named it Pyrenochaeta mackinnonii.

He also performed many studies with numerous publications on Cryptococcus, Actinomycetes, Dermatophytes and the various Mycobacteria.

Thank you Art DiSalvo for your excellent work on this.