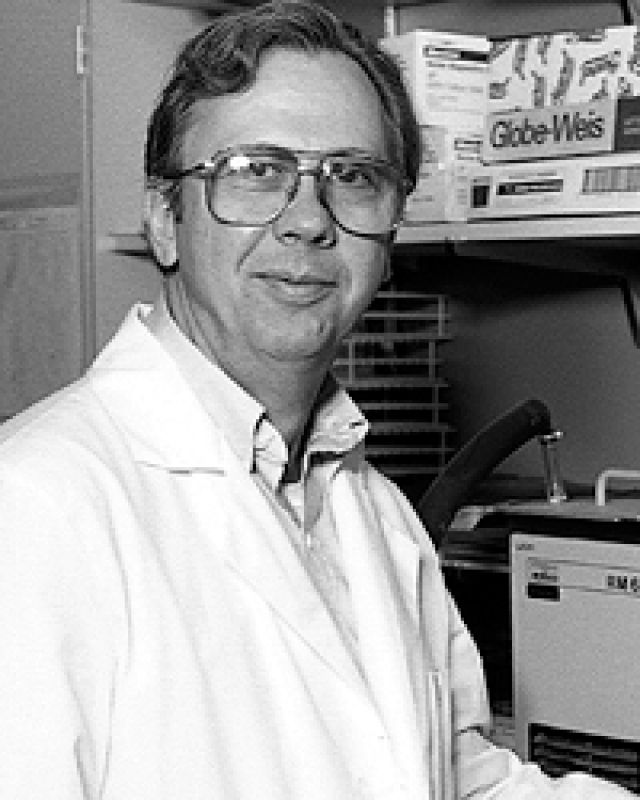 Professor William Merz, retired Mycology Laboratory Faculty Director in the Division of Medical Microbiology at the Johns Hopkins University School of Medicine, passed away from complications of Parkinson disease on November 22.
Dr. Merz retired in January 2009 after a very long and productive career in the Department of Pathology at the Johns Hopkins University (JHU) School of Medicine.  Dr. Merz was recruited to Johns Hopkins in 1974 by Dr. Patricia Charache from Columbia Presbyterian Hospital and Columbia University in New York where he was the Associate Director of the Mycology Laboratory and Instructor in Dermatology at the time.   His research focus while at Columbia was primarily in the area of dermatophyte infections.
Dr. Merz received his bachelor’s degree in Botany from Drew University and his PhD in Microbiology in 1968 from West Virginia University.  From 1968-1970 he did an NIH postdoctoral fellowship at Columbia University also in Microbiology.  In 1987 he took a sabbatical to focus on molecular biology and genetics.
In addition to serving as the Director of the Mycology laboratory for 34 years, Dr. Merz held numerous other positions and appointments.  He held a joint appointment in Molecular Microbiology and Immunology in the JHU Bloomberg School of Public Health and Hygiene, Directed the Molecular Epidemiology laboratory in the Microbiology Division and he was Acting Director of the Microbiology Division from 2000-2002.
During his extensive career, Dr. Merz authored over 145 peer-reviewed publications, numerous books and book chapters and served as Co-editor of Topley and Wilson, Volume IV Medical Mycology from 1999-2005. He served on the editorial board of several journals including the Journal of Clinical Microbiology. He received numerous awards both for his excellent teaching and for his contribution to the field of Medical Mycology.  The latter include the prestigious Max Littman Medical Mycology Society of NY Award and the Medical Mycology Association’s Billy Cooper Memorial Meridian Award for Clinical Mycology.  Dr. Merz won the JHU Pathology Housestaff Clinical Pathology (CP) Teaching Award three times and in 2006 was presented simultaneously with the CP award and the Pathobiology Teaching Award.
Abundant graduate students, residents, medical technologists and fellows in numerous departments recognized him as a fabulous and influential mentor.  They cited his wicked sense of humor as one his memorable attributes.  All colleagues appreciated his support of clinical programs, his extensive knowledge base in Medical Mycology so key to patient care at JHH, and his wonderful collaborative spirit.  When not at work Bill enjoyed traveling with wife Cindy, a passion for antiques, and quality time spent with family and friends, often while boating on the Gunpowder River.
Bill is survived by his wife, Cindy, retired supervisor of the JHH Immunology laboratory and two daughters.