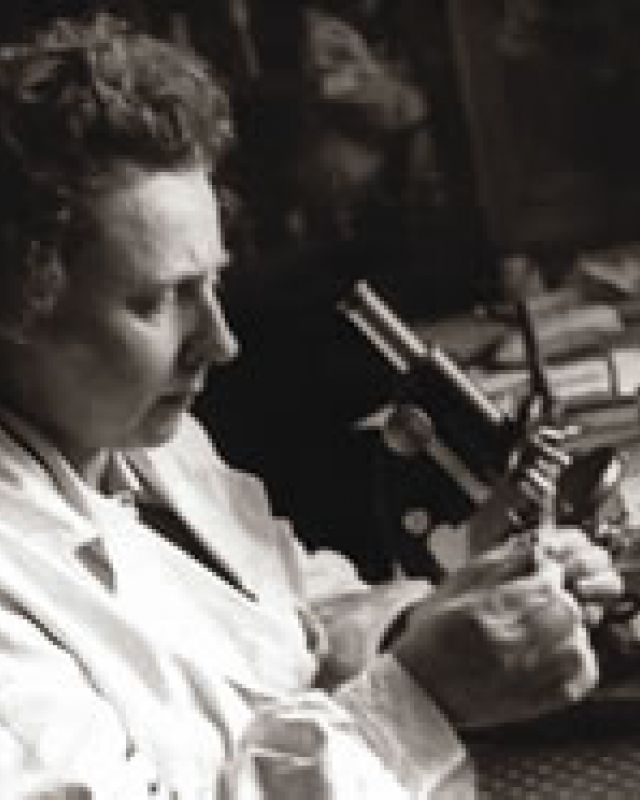 In 2013, the Russian National Academy of Mycology and the entire Russian-speaking community of physicians and researchers in mycology marks an important date: the centenary since the birth of the Doctor of Biological Sciences, Professor Zinaida Gavrilovna Stepanischeva (1913-2004). The fruitful cooperation of outstanding researchers, Zinaida Stepanischeva and Abram Arievich in the middle of the XX century has led not only to new discoveries in the field of diagnostics, treatment and prevention of fungal infections, but also to the creation of the Moscow school of medical mycologists. A striking example of "creative symbiosis " of a physician and a biologist, a symphony of scientific and practical achievements, upholding the truth, fight for their beliefs and the dignity of the scientist under any conditions, provided by Professors Arievich and Zinaida Stepanischeva, inspired the rise of medical mycology in USSR and formation of late Russian National Academy of Mycology.

Zinaida Stepanischeva was born in Saratov, Russian Empire. Her parents, who came from the peasantry, were eager to learn and so left the countryside. The family moved to Moscow when she was 4 months old. The father, a law student at University, joined the Socialist Party and was imprisoned by Tsarist government, and in 1918, after the Revolution, he became the chairman of the Credit Cooperation Bank. In 1919, in the midst of Russian Civil War an influenza pandemic cut short his life. A mother with two children was left without a livelihood, but a hard life only intensified the desire for a child to learn. Young Zinaida, although being underprivileged as ‘former bourgeoisie’, succeeded graduating from a reforming Soviet school, and then a factory school. In 1939 she was a graduate of Biological Faculty of Moscow State University. She joined the Institute of Veterinary Dermatology, and then, right before the Second World War the Moscow, she applied to the mycology clinic, organized by Professor Abram Arievich. Her first works in mycological research continued under his leadership while being evacuated in Tashkent in 1941. There, they organized the “Fungal house” - a medical facility, where many orphans of the war and homeless children were provided with medical care for tinea infections. Here the future Doctor of biological sciences, having already learned the basics of Mycology, had to do not only all the investigations in hunger and cold, but all other tasks herself too: washing test tubes, cooking the culture media, and even finding or improvising everything, from the lab equipment to firewood. Upon returning with the Institute in Moscow after the war, Zinaida continued to work with patients, learned clinical photography and in 1947 she defended her Ph.D. thesis on Trichophyton infections. As a result of the accumulation of a large clinical and laboratory material, together with Professor Arievich she published the first Atlas of fungal infections (1951), which is still of interest to mycologists .

Atlas was released in the heyday of Lysenko campaigns, the bane over modern biology and genetics. Sabouraud was called “reactionary”, and citing his work or claiming that fungi may form stable species led to the refusal of publication. Later between 1949 and 1953, the persecution of the Jews campaign took place in the form of “Physicians trial” and any reference to contemporary works in mycology outside USSR was forbidden. Many of her colleagues were repressed or fired with no further perspectives in medicine or biology. Not being the members of Communist Party, Arievich and Stepanischeva, the most valuable researchers and prolific authors, were often considered as ‘suspicious’ and ‘untrustworthy’ specialists, and their loyalty was on frequent ‘triages’ by the Party members of the same institution.

In times of severe suppression of dissent and independent research in science, fears of espionage and search for ‘domestic enemies’, Arievich and Stepanischeva continued their work. Original ideas, suggestions arising from clinical practice and rigorous, almost infinite laboratory developments gave the abundant results. Zinaida Stepanisheva put a lot of effort in introducing fluorescent diagnosis, disinfection chambers for Microsporum infections, first modern antifungals. In 1959 she published a doctoral thesis on the epidemiology and biological characteristics of Microsporum infections. Over a lifetime, she published more than 160 scientific papers, wrote chapters in the USSR Medical Encyclopedia and Veterinary Encyclopedia. In collaboration with Arievich she released book , "Sketches of fungal diseases of the skin (1955), and “Candidiasis as a complication of antibiotic therapy "(1965). She also wrote mycological chapters in Soviet manuals of microbiology, epidemiology and infectious diseases (1966) .Much has been done to strengthen the education in medical: ten-day teaching campaigns for physicians from across the USSR, visiting with lectures, development of manuals and recommendations. Later she took part in many Soviet expeditions to Central Asia, Far East, Africa and South America, exploring the fungal pathogens and their habitat, contributing to the huge mycological archive.
Arievich and Stepanischeva had left the Central Dermatovenereology institute in 1966, to found the Moscow Center of Deep Mycoses and later – the Moscow Mycological Center, the institutions that are active and keep the traditions of their founders. Abram Arievich had passed away in 1988 and Stepanisheva later retired. She remained the civil activist, helping the dissenters and saving the homeless and repressed. In early nineties she enrolled to the democratic movement, for many years monitoring the election campaigns.

In 2002, Professor Stepanischeva gave her farewell speech to the first Congress of the Russian mycologists .She passed away in 2004. And in 2005 her book “Inconclusive Truth” went out of print.

For a long time she wrote the memories of the time and her life in mycology. She gave all the publication rights to the ‘Peoples archive’ and the publication received the support of Sergey Dubov fund under the series ‘Century XX. Confrontation: The Man - The system’. Being perfect narrator, Zinaida Stepanischeva describes the events in style worthy of Mikhail Bulgakov and Andrei Platonov. For the specialists in mycology, this book offers the history of national mycology, and the professional activities of her contemporaries are shown from the inside, with all complexities and contradictions. Providing many clues for the understanding of current state of late Soviet and current Russian science, the last work of Zinaida Stepanischeva is at the same time a civic feat, and a significant cultural phenomenon of a bygone era. Zinaida Stepanischeva remained a tireless toiler and consistent fighter for the truth in mycology and life, to the end.

To honor the memory of the founders of modern Russian medical mycology, the All-Russian National Academy of Mycology established the award: AM Arievich and ZG Stepanischeva medal “For merits in medical mycology”. The first award ceremony took place in Moscow, during the memorial conference for the centenary since birth of Professor Zinaida Stepanischeva (September 26, 2013).